I’m noticing some changes in the way I look at apps and sites these days. I’m not to the point where I see all the code coursing underneath the app Neo-style, but I’m starting to see that people made choices, and I’m curious as to the why and the how for each of those choices. I stumbled across a great time waster in the form of the game Two Dots, and a big reason I love to play it is that I love its design and aesthetic as much as the gameplay. 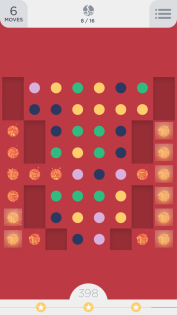 It’s basically just a game where you touch one dot and connect dots with the same color by dragging your finger across the screen. It’s so simple, but think about how “smart-phone-native” this is. Have you ever tried to play Tetris on your iPhone? Maybe it’s just me being an old man, but it’s just not the same without your GameBoy directional pad and buttons. It always has that “square peg in a round hole” feel to me any time I get nostalgic and download Tetris for my phone.

Two Dots was built for your phone and it shows. I love apps and technologies that focus on doing one thing well and refuse to be a one-stop shop for all your gaming/computing/planning/etc./etc./etc. needs.

I’m actually writing this blog with the desk.pm app, built for blogging and distraction-free writing. It’s all about content creation. If you want to dress things up a certain way or make your blog look super cool, there are a million ways to do that, but that’s not what desk.pm does. It just focuses you on writing, so you can create actual content.

This may seem counterintuitive to many people, especially those who want to make a lot of money. I haven’t been doing this long, but I can already tell you that it takes a lot of courage to build an app that just does one thing. The fear of your app being rejected because it doesn’t have x, y, or z feature can be crushing, and you can just take a quick look at the app store to find examples of developer insecurity all over the place.

Two other great examples of focused creation are Side Mirror and Raising Cane’s. Side Mirror is an app for people who do live demos and presentations. They can preview what’s being projected while still making private notes on their own screens and saving their necks from having to turn around to watch your work on the large screen. How tempting to make another powerpoint clone? That’s where the real money would be, right?

Now, Raising Cane’s is not an app, but we go way back. I went to college at LSU and spent most of my time about twenty yards from their very first location. We basically used it as an off-campus cafeteria and ad-hoc meeting space when the need arose. They just serve chicken fingers, fries, toast, and coleslaw. There are a few configurations of these items, but that’s all they do. They don’t serve breakfast, they don’t serve burgers, they just serve chicken fingers.

There are a lot of these restaurants now, and I don’t even think Raising Cane’s was the first, but it was a novel idea in the simpler, gentler time that was the late 90s. This aesthetic was with me before I started down the web development road, but now that I’m here I feel like I’ve learned the lesson well. As I’m dipping my toes in my own side projects, I’m encouraged that I don’t have to solve a ton of problems.

I just have to think about what bugs or delights me. What sparks any kind of emotion in me? Is it time to create a Monty Python quote or meme generator? I think it might be.